Lynn Lowry: A Lifetime of Appreciation

As part of Something Wicked Film Festival’s continuing goal to promote independent film-makers and promote independent films, this year’s event marks the first year we added something new to the program which is the Lifetime Achievement Award.  With this award we hope to shed light on and acknowledge film-makers who have had a profound effect on the industry and who continue to inspire
a new generation of film-makers through their arts and craft.  This year we decided to honor actress Lynn Lowry for her exceptional contributions to the independent and mainstream film industry.

For the feature Schism she also contributed the Story and was producer showing her progression from actress to writer and producer. She was also producer on the short films The Whole Town’s Sleeping (2014) and executive producer for Volumes of Blood (2015).  The short The Who Town is Sleeping also marks her debut behind the camera as director and she has contributed “Story” credit to the upcoming short films First Impressions Can Kill and Espresso to Die For.

As you can see, Lowry has maintained a presence in the mainstream and indie film worlds and continues to do so in her almost fifty years in the industry.  For this reason, we wanted to honor this accomplished film-maker with our first Lifetime Achievement Award. 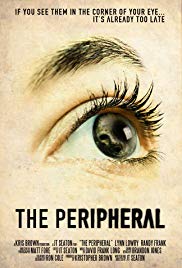 Unfortunately, Lowry was unable to make it for this year’s event as she spends her time, when not ma  This wasn’t a problem as she allowed us permission to screen one of her more recent short films The Peripheral (2014) in which she stars as Dr. Redding, a psychologist whose patient believes that monsters that he can see in his peripheral vision are out to get him.  This is a very focused and suspenseful thriller in which Lowry continues to show why she is a talented actress.  The film ended up taking home the Festival Director’s Award for “Scariest Film” and “Most Memorable Villain.”  We hope you get a chance to see this amazing short film!
king films, making appearances at various conventions and other film festivals. 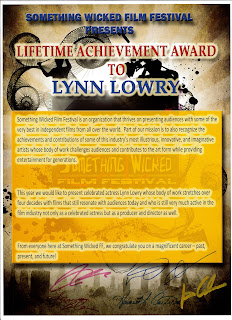 Below is the image of the Award that was given to Lowry and signed by all the SWFF family members and here is a link to watch the video of Festival Director Kevin L. Powers given the award out during the Opening Night Ceremony - https://vimeo.com/286702177  We hope to continue in this tradition of honoring important film-makers each year and stay tuned for more info about the SWFF soon!