We are proud to present our complete list of Feature Films for this year's event!  Make sure to come out and enjoy these amazing films August 2-4.  Make sure to pick up your tickets now - https://filmfreeway.com/somethingwickedfilmfestival/tickets

TITLE:  CAMP DEATH III IN 3D
RUN TIME: 1:19:30
GENRE: HORROR
SCREENING TIME: SATURDAY, AUGUST 3 – SCREENING ROOM #1 @10:00PM
SYNOPSIS:
'Camp Death III in 2D!' is a crude, corny & Canadian comedy/horror 80's slasher parody of the 'Friday the 13th' series and is proudly presented in two flat dimensions!
This $35,000 CDN opus has been described as "the most horrible GOOD movie you'll ever see!"
Hogwash you say?
Just read some of the 100+ critic reviews below!
The film took over 4 years to complete and was partially financed by the director walking for 24 hours straight with a coconut chained to his waist. True story.
SPECIAL NOTES:
Website: https://www.amazon.com/dp/B07NP4BT9Q
Facebook: https://www.facebook.com/campdeath/
Twitter: https://twitter.com/campdeath3

TITLE:  CLOWN VERSES MONKEY
RUN TIME: 1:05:00
GENRE: ANIMATION/EXPERIMENTAL
SCREENING TIME: SATURDAY, AUGUST 3 – SCREENING ROOM #2 @10:00PM
SYNOPSIS:
This is a movie about a society of clowns and monkeys and their day to day struggles and frustrations. It's like Robert Altman directed an episode of The Banana Splits.

TITLE:  NEXT KILL, THE
RUN TIME: 1:20:30
GENRE: ANIMATION
SCREENING TIME: SUNDAY, AUGUST 4 – SCREENING ROOM #2 @11:30AM
SYNOPSIS:
After the city’s deadliest serial killer breaks out of jail, the aging Texas Ranger that put him away comes out of retirement to stop the monster’s rampage, this time for good. Violence and hilarity ensue as the city is thrown into chaos with explosions, gun fights, car chases, and more!
SPECIAL NOTES:
Website: http://thenextkill.com/
Facebook: https://www.facebook.com/TheNextKill/
Twitter: https://twitter.com/thenextkill 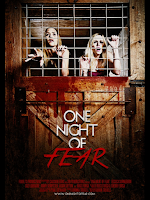 TITLE:  OOPS, I MURDERED THE PERSON THE PERSON I LIKE LIKES
RUN TIME: 0:50:00
GENRE: ANIMATION
SCREENING TIME: SUNDAY, AUGUST 4 – SCREENING ROOM #2 @2:45PM
SYNOPSIS:
When Horatio finds out his crush has a boyfriend in the army, he enlists-- so he can kill him. Based on "The Spanish Tragedy" by Thomas Kyd, this film is made entirely out of cardboard.
SPECIAL NOTES:
Website: https://oopsimurdered.com/
Facebook: https://www.facebook.com/oopsimurd3r3d/

TITLE:  SLUMBER STILL: OUT OF LIGHT
RUN TIME: 0:51:37
GENRE: HORROR
SCREENING TIME: SUNDAY, AUGUST 4 – SCREENING ROOM #2 @4:15PM
SYNOPSIS:
When Mira starts to take care of an eccentric old woman, her world is turned upside down. While being menaced by a sinister entity, Mira must unravel the mystery of a family's dark history while fighting for her life and sanity. Slumber Still: Out of Light is the next frightening, Sleep Paralysis thriller in the Slumber series from Echo Light Productions.
SPECIAL NOTES:
Website: https://www.facebook.com/echolightpro

TITLE:  SNOT THAT ATE PORT HARRY, THE
RUN TIME: 1:31:42
GENRE: ANIMATION
SCREENING TIME: SATURDAY, AUGUST 3 – SCREENING ROOM #2 @6:00PM
SYNOPSIS:
Port Harry. 1958. A sleepy little fishing town with a population of 1,000. Home to good, wholesome hardworking Americans with good, wholesome kids. But when a freak natural phenomenon results in strange sightings, odd deaths, and unexplained disappearances, that sleepy little fishing town is woken up. Now, Dr. Dana Stanley, a scientist from the big city, partnered with local Sheriff, Jack Dohickey, is on the case with the military at the ready to scratch their trigger fingers. Their only lead? A teenaged girl named Bonnie Corman. A high school senior who so far is the only living person to make contact with, and survive an attack by the strangest and most destructive force the world has ever known. Together, with a little luck, or maybe a lot of luck, they'll have a chance to defeat The Snot That Ate Port Harry.
SPECIAL NOTES:
Website: http://outhousecartoons.com/SnotMovie.html
Facebook: https://www.facebook.com/SnotMovie/
Twitter: https://twitter.com/OuthouseCartoon