This year’s crop of feature films crosses every genre and there should be a film for everyone or all the films for everyone!  One of the first features I’d like to talk about is for the hardcore horror fan and the fan of bigfoot films which is director Erick Wofford’s BIGFOOT’S BRIDE [USA] which is a balls to the wall frenetic and fun throwback film that does something new with the bigfoot film. Its aesthetic is pure ‘90s VHS trash cinema so if you’re a fan of Troma films then this is the perfect film for you.

From there we have several films that bring their stories into the modern age!  First up is director Troy Escamilla’s latest film TEACHER SHORTAGE [USA].  A couple years ago we screened his last film STIRRING (now renamed MRS. CLAUS) and we are excited to bring audiences his latest film which delves into the world and politics of public schools while making a slasher film!  No teacher is safe in this film and neither is acclaimed actress Brinke Stevens who returns to give Escamilla’s film some true horror film clout once again (she also starred in his film STIRRING).  Next up is the possession film CAMP WEDDING [USA] from director Greg Emetaz which mixes weddings and summer camp in its homage to both Friday the 13th and Night of the Living Dead!?! It is both funny and suspenseful while using modern technology and our over reliance on cell phones and being connected to tell a new type of horror film that will make you fear modern technology.

Next up is the fantasy film UNDER CONTROLL [India] from director Eric Hordes which is a new type of movie about trolls and a fantasy film that’s both equal parts exciting and funny.  The performances really stand out and are what makes the film work especially in its more comedic moments.

This leads to our other fantasy feature REEL ME – THE FILM MUSICAL [Germany] from director Peter Lund which is a musical romance comedy in which the six internal personalities of the main character battle each other in a coming of age film that also speaks on sexuality and sexual preference.  Lund makes it all work in this film that has some amazing dance sequences and performances by the cast.  It’s like a live action version of Pixar/Disney’s INSIDE OUT, only way better as a live action film.

This year we are screening our first experimental feature with director Priyanka Das’ UNDER THE JAZZ. CIRCULATION. FORMATION [USA].  This is a film that’s better to watch and devise your own interpretation as that is part of the enjoyment of this film which seeks to reach an emotional response with the audience through the characters who strive to find a connection between each other. 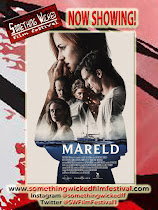 The last of our main features is director Ove Valeskog’s MARELD [Sweden] which takes the cast and crew to an island to film their latest horror film but they encounter some shady soldiers on the island which then make filming very tense and dangerous.  The film is amazing as it mixes the filmed footage, behind the scenes footage, and what happens on the island seamlessly into a suspenseful thriller in which you don’t know what is going to happen next especially when the cast and crew start having their own problems with one another.

In addition to these films we are also celebrating the 15 year anniversary of director Ron McLellen’s HELL’S END [USA] a sci-fi/horror/WWII film in which a soldier from the future goes back to the past to stop the Nazi’s from experimenting on POW soldiers in the attempt to create the perfect biological weapon!  There is also HOUSE OF SECRETS (2015) [USA] which is celebrating its 5-year anniversary which follows five women who make one mistake that may cost them a lifetime.  This thriller is written/produced/directed by yours truly!

I hope you decide to join us this August 7-9 for Something Wicked Film Festival’s Online Festival Event which is the only place where you will be able to watch all of these films from the comfort and safety of your own home.  For more info visit us at www.somethingwickedfilmfestival.com and to buy tickets you can go to Film Freeway (https://filmfreeway.com/somethingwickedfilmfestival/tickets) or Ticket Leap (https://something-wicked-film-festival.ticketleap.com/something-wicked-film-festival/).